August 10, 2016 by Dagmara Biernacka No Comments

Lots of people (and probably most of you guys) associate living in NY with a fancy lifestyle. Let me tell you this once again – there is a group of people here that lives like that, but trust me, it is not that large. What’s more, even if they party a lot of the best places, they still work a lot. Or they just are on cocaine all the time (you wouldn’t believe how many people do cocaine in NYC – but then, maybe you would).

I don’t go out often (the opposite of what you’d think I do), but when I do go out, I want to have the NY experience. Only recently, we celebrated my friend’s birthday and I was invited to have a brunch in the meatpacking district in Manhattan (it’s a neighborhood filled with clubs). I thought it’d be brunch like always – some eggs, chit chat and meeting new people. We sat down, ordered food and suddenly the staff started to put the drapes down and the music was getting louder and louder. I spotted a DJ and some performers to my surprise. It got really dark, disco lights went on and it started. Most of us (brunch ladies) had no idea what was going on. Apparently, Bagatelle, the place we went to, is known for their party brunches. Bagatelle has other locations in expensive places like Miami or St.Barths and is considered an exclusive spot.

As soon as we finished eating, the staff took most of the tables away and we started dancing. So did the whole restaurant. There were guys performing, the DJ didn’t stop playing and people started heading towards the couches and tables, drinking more and more (some servers were pouring alcohol straight to people’s mouths). It felt like being in a night club. Suddenly at 6 pm they put “Empire State of Mind” on (a bit corny and overfamiliar tune, I would say), the drapes went up and the daylight hit us in the eyes. The party finished – right about time because most of the guys were already wasted.

You had two choices then – go home and recover (recommended) or keep going in a different place since Bagatelle was getting ready for a dinner party. Since you were in meatpacking district already, you could have chosen a few places. When you are there, just go to Le Bain, enjoy the view that spot offers and dive in the Jacuzzi that’s in the middle of the dancefloor (I’ve never tried it and am not sure if I ever reach the right level of intoxication to try). Look at the gorgeous people and have some fun. Did you want some NYC vibe? Here you are – it’s waiting for you.

Check out my video youtu.be/dvRQFNOIWRI 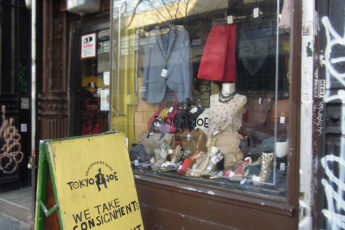