September 23, 2015 by Dagmara Biernacka No Comments

I once wrote at Just Like NY about Brighton Beach, where Russian and Arab cultures mingle side by side. Those two entire different mindsets manage to share the neighborhood. They are separated by two streets, one of which is dominated by Hispanics. Even though it’s been a year since I moved here, I still wonder how is it possible that culture as orthodox as the Arab one (most families come from Pakistan) is able to cope in a city as loose in terms of morals as NYC. I even wonder about this when I look at myself and the Russian girls from the neighborhood, especially during the summer. Whereas we wear shorts and scant tops, they are covered from head to toe  – some of them in burkas, some in other traditional garments, but none of them ever showing their hair (much less their bodies!). I suspect that in their eyes we’re practically naked. I am really curious what their kids think of me (girls of certain age start to wear garments mirroring their mothers’) whenever I catch them looking at me intently. (I can only hope they don’t think I’m a slut!) Their men look at me, too, even though they pretend not to. They, too, wear long garments, some of which make me think of pajamas. They are also fond of flip-flops, often worn with the socks on. No one is seeking eye contact, though: they mostly pretend they don’t see me.

On the corner of my street I find a kiosk with their newspapers, there are two restaurants with their food near me, and there are at least three eyebrow-fixing places nearby. The women go shopping, take care of the kids and do laundry, while men take care of business and engage in long discussions with other men. Every morning the men gather for prayer at the Islamic Center. Every time I look over there, I see a group of guys praying (sometimes I see some kids, but never any women). Friday for them is like Sunday back in Poland for the Poles – they gather at the Center since morning(in the picture), roll out their carpets, sell a variety of incense and everyone is dressed up (the women’s clothes are often breathtaking). It’s a holy day for them. We’re different, but we can live with each other. It’s all about respect each others cultures. 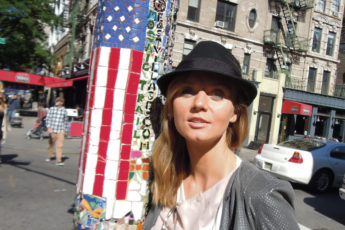 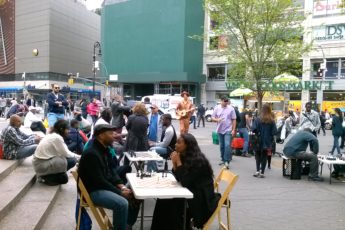 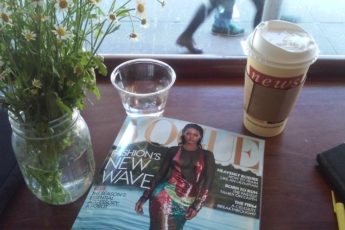 How To Brew Coffee In New York City

« Previous post
Black and White, or What Race Has Got To Do With It
Next post »
Ashely Says No to Marriage of Convenience